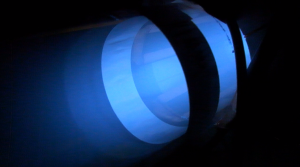 PRAGUE, PRAGUE, CZECH REPUBLIC, November 21, 2018 /EINPresswire.com/ — A revolution in small satellite engines is being prepared in the Czech Republic.

SpaceLab EU and the Czech Aerospace Research Centre (VZLU) have entered into a partnership under which they will, over the next five years, work together to develop and commercialize a unique air-breathing ion propulsion engine that allows satellites to maintain their position on a very low orbit. The engine thrust is created by accelerating the residual atmosphere of the Earth and no longer needs any other fuel. The project of the new engine type is a response to increased users' demand for the small-satellite fleets operation and improvement of the economy of their operations, including prolonging their service life.

The uniqueness of the joint project is increased by the fact that it is a unique opportunity globally to make very low orbits accessible to satellite traffic. The benefits of operating on a very low orbit are obvious both in the field of communications – significantly lower latency (signal delay) compared to the present situation and lower transmitter power requirements, and in the field of visual monitoring of the Earth – significantly more accurate and clearer pictures. The value of the joint development is in millions of EUR. The commercial potential is expected in hundreds of millions of euros. The prospects are expected to be the future commercial operators of small-satellite fleets, like SpaceX or OneWeb, as well as military users.

The teams of both companies are working together on the project at VZLÚ premises in Prague, where both computer simulations and experimental hardware are being born. The teams have there all currently necessary laboratory equipment, including new clean rooms necessary for experimentation and preparation of the engineering model, which will then be tested in space.

SpaceLab EU SE is a newly established entity dedicated to space research and its global commercial use. The entire project, including the SpaceLab EU, was launched thanks to the group of European enthusiasts and investors joint under the hDock42 brand, which is focused on the promotion and commercial development of European know-how.
(http://spacelabeu.com)

The Czech Aerospace Research Center (VZLU) is a national centre for research, development and testing in aviation and astronautics. Its mission is to provide scientific support and bring innovative solutions for the industry. Results of its research projects are disseminated into industry via publications, knowledge transfer and educational activities.
(https://www.vzlu.cz/en)