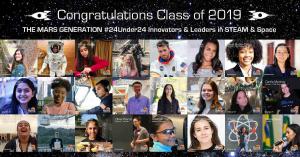 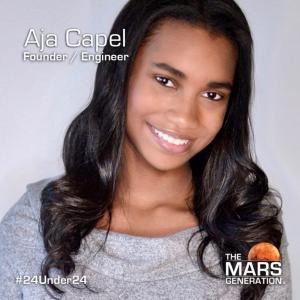 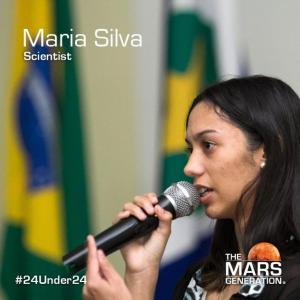 We are honored to support these prestigious STEAM awards. Every year, each of the award winners displays an exceptional commitment to innovation, excellence, and a can-do attitude.”
— Eileen Drake, CEO of Aerojet Rocketdyne

MINNEAPOLIS, MN, UNITED STATES, June 11, 2019 /EINPresswire.com/ — Are you making a difference in the world of STEAM or space? Are you under the age of 24? Do you want to be a part of something bigger? We invite you to nominate yourself for the third annual The Mars Generation 24 Under 24 Leaders and Innovators in STEAM and Space Awards, an industry-recognized, highly competitive awards program honoring young people in Science, Technology, Engineering, Arts and Mathematics (STEAM) fields.

For the third consecutive year, The Mars Generation (TMG) has opened the nomination period for the prestigious STEAM awards. The award celebrates change-makers of the next generation–young people who are not only making strides in their STEAM fields, but are also leaders in their communities and advocating for STEAM education and/or space exploration. Students and young professionals are nominated from around the globe for their work on projects big and small.

Ken Buckler, a cyber security professional and TMG Student Space Ambassador Board Chair, encourages young people considering the award to self-nominate. “The 24 Under 24 awards highlight the exceptional work of young people who are the face of The Mars Generation,” said Buckler. “The cohort of award recipients are an inspirational catalyst to youth all over the world,” he explained. “Our 24 Under 24 nominees underscore what can be accomplished when you set your mind to something and put in the work it takes to succeed.”

Abigail Harrison, founder of The Mars Generation, says she is excited that the awards are open for self-nomination again this year. “We believe in the abilities of young people and that they are not only capable of but responsible for making a change in the world around them,” Harrison says. The 24 Under 24 award empowers young people with the recognition and prestige to continue in their studies, seek out additional resources for their projects, and bring attention and support to their work. Harrison continues, “The 24 Under 24 awards serve as an embodiment of our mission by calling on young people to reach for their ‘Mars’, whatever that may be.”

"We are honored to support these prestigious STEAM awards," says Eileen Drake, CEO of Aerojet Rocketdyne, the sponsor for the TMG 24 Under 24 awards in 2020. “Every year, each of the award winners displays an exceptional commitment to innovation, excellence, and a can-do attitude. It will be exciting to see what new discoveries and advances these award winners will make in space exploration.”

The Mars Generation 24 Under 24 Leaders and Innovators in STEAM and Space awardees from past years are, indeed, changing the world with their work. Projects have ranged from finding ways to generate clean energy, to authoring books about women in STEM, to assisting the development of their respective nations’ space programs, and so much more. They serve as role models to their communities and inspiration to others in their fields. “We are proud to honor these students and young people who are dreaming big, acting big, and inspiring others with their work and their lives,” says Harrison.

Nominations for the Class of 2020 are now open and will be accepted through November 1, 2019. Students must nominate themselves for the awards. Nomination forms and further information about the awards can be found by at: https://www.themarsgeneration.org/steam-space-awards

About The Mars Generation
The Mars Generation is a volunteer-driven 501(c)(3) nonprofit with an advisory board that includes astronauts, engineers, scientists, and professionals from the nonprofit and business communities. Reaching millions of people since 2015, the organization has served students and adults from around the world through multiple programs, including the Student Space Ambassador Program, Future of Space Outreach Program, and Space Camp Scholarship Program. The Mars Generation is supported by private donors, members, influencer work, and major corporate sponsors. Through an innovative approach of leveraging new media technology and providing engaging content and programs, the organization aims to excite and educate students and adults about the importance of human space exploration and STEAM education to the future of humankind. For more information on The Mars Generation, go to: www.TheMarsGeneration.org

About Aerojet Rocketdyne
Aerojet Rocketdyne, a subsidiary of Aerojet Rocketdyne Holdings, Inc. (NYSE:AJRD), is a world-recognized aerospace and defense leader that provides propulsion systems and energetics to the space, missile defense and strategic systems, and tactical systems areas, in support of domestic and international customers. For more information, visit www.Rocket.com and www.AerojetRocketdyne.com. Follow Aerojet Rocketdyne and CEO Eileen Drake on Twitter at @AerojetRdyne and @DrakeEileen.