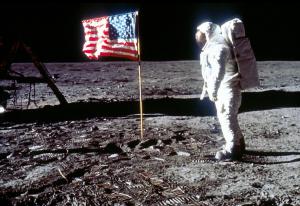 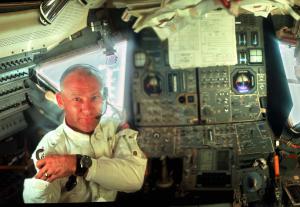 Previously unseen photo-composite of Aldrin in the Lunar Module prior to landing. Credit: NASA/Emil Petrinic 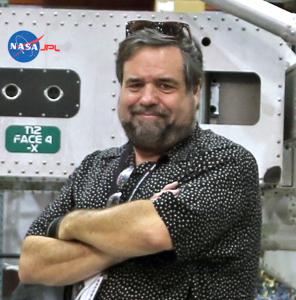 Rod Pyle, best-selling author of "First on the Moon" and 14 other space books now available for Interviews on the 50th anniversary of the first lunar landing.

Looking back 50 years, it's incredible that the U.S. managed such an amazing feat–this was the era of the slide rule and pencil-and-paper design, yet Americans explored on the lunar surface six times.”
— Rod Pyle

LOS ANGELES, CA, UNITED STATES, July 10, 2019 /EINPresswire.com/ — Rod Pyle, space journalist and author of four books on the Apollo program including the current best-selling "Apollo 11: The 50th Anniversary Experience," with a foreword by Buzz Aldrin, is now available for interviews about this internationally significant milestone. A half-century ago, Neil Armstrong and Buzz Aldrin became the first humans to explore another world, and history was forever changed. In this new book, Rod explores the people, the machinery, and the national drive that made John F. Kennedy's dream achievable in just 8 short years. Through exhaustive research, extensive interviews with the astronauts and their children, and previously-unseen compositions of archival photographs from the mission, "FIrst on the Moon" offers an unparalleled look at this monumental achievement. Now in its fifth printing, "First on the Moon" joins the author's other Apollo books, "Missions to the Moon" and "The Apollo Missions," both in reprint for this very special year. Possible topics of conversation include the impetus behind Kennedy's lunar decision, the enormous obstacles that had to be overcome to accomplish the first landing on the moon, the incredible machines that made these missions of space exploration possible, and the inner lives of the brave astronauts–Neil Armstrong, Buzz Aldrin, and Michael Collins–who flew this historic mission. Rod also obtained exclusive interviews with the sons of Armstrong and Aldrin that are riveting. "First on the Moon," now in its fifth printing in just over two months, is the best-selling guide to the Apollo 11 adventure.

"I was barely a teenager when the first humans walked on the moon," Pyle says, "and it was absolutely transformational. In just eight years, the United States went from the short 15-minute flight of Alan Shepard, who barely entered space, to landing on the moon in one of the most intense superpower rivalries of the era. Looking back 50 years, it seems almost incredible that the U.S. managed such an amazing feat–this was the era of the slide rule and pencil-and-paper aerospace design, yet Americans explored the lunar surface six times, each mission a spectacular advance over the last. And it all began with that incredible evening on July 20th, 1969, when Neil Armstrong and Buzz Aldrin first walked on the moon. NASA is now headed back to the moon–this time with women in the cockpit–to repeat this fantastic achievement."

In addition to his 15 books on spaceflight, which have been published in ten languages including Mandarin, Japanese, Dutch, Spanish and English, Pyle is also the Editor-in-Chief of "Ad Astra" magazine, a print periodical published by the National Space Society. He has also worked for NASA's Jet Propulsion Laboratory and the Johnson Space Center, and has written for WIRED, PopSci, Space.com, LiveScience and many other periodicals. Other recent books include "Space 2.0," also with a foreword by Buzz Aldrin, about the new space age, and "Heroes of the Space Age," about some of the men and women who made these spectacular achievements possible. Review copies of "First on the Moon" and "Ad Astra" are available by request.

Rod appears regularly on radio stations KFI/Los Angeles, WGN/Chicago, and a variety of other radio networks across the country, and makes frequent appearances on PBS's "Between the Lines" and C-SPAN's "Book TV." He also hosts the popular "Cool Space News" podcast on iHeart Media.