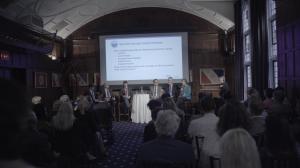 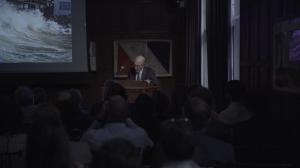 You can hear movements within receding glaciers when you stand on them, and these desperate murmurings should not be witnessed idly. Nature is giving us a very clear message.”
— Rt. Hon. Katrín Jakobsdótti, Prime Minister of Iceland

NEW YORK, NY, USA, September 28, 2019 /EINPresswire.com/ — The Intergovernmental Panel on Climate Change’s (“IPCC”) Special Report on the Ocean and Cryosphere in a Changing Climate (“the report”) made international headlines when it was released Wednesday at 5 am EST. The report reveals the extent to which climate change has already affected the world’s oceans and the cryosphere, which is defined in the report as “the components of the Earth System at and below the land and ocean surface that are frozen, including snow cover, glaciers, ice sheet, ice shelves, icebergs, sea ice, lake ice, river ice, permafrost, and seasonally frozen ground.” The report also provided myriad projections that reveal the probable effects on the oceans and the cryosphere if the world’s nations either fail to or fulfill their duties as established by the 2016 Paris Climate Agreement—namely, to keep the average global temperature increase to well below 2 ̊C above pre-industrial levels.

The report is clear: Failure to meet the bar set by the Paris Agreements will be catastrophic for humanity, as well as species that lack the ability to quickly adapt to dramatic changes in their ecosystem.

To better understand the report, three of its authors—Dr. Michael Oppenheimer, Dr. Ben Orlove, and Dr. Robert DeConto—as well as two additional scientists, Dr. R. Max Holmes and Dr. Jennifer Francis, to speak before an audience at The Explorers Club on Wednesday evening. Following presentations by Drs. Oppenheimer, Orlove, DeConto, and Holmes, Dr. Francis joined the other four scientists on stage for a panel discussion that was moderated by host Dr. Philip Duffy, the Director of the Woods Hole Research Center and a former White House senior advisor on climate and science in the Obama administration. The event was part of The Explorers Club’s week of programming based around Climate Week.

The evening’s event began with opening statements from the Rt. Hon. Katrín Jakobsdótti, the Prime Minister of Iceland, who spoke passionately about not only the report, but some of the more salient effects of climate change, particularly how glaciers are disappearing from Iceland. She also spoke about climate change’s effects of the ocean waters surrounding her homeland. “The impact on the ocean is less visible, but no less profound,” she said, before relaying reports from several Icelandic fisherman, who claim to be seeing new species of fish that have migrated north because of warming waters. In her closing statements, she noted that you can hear movements within receding glaciers when you stand on them, and that these desperate murmurings should not be witnessed idly. “Nature is giving us a very clear message,” Ms. Jakobsdótti concluded.

Following the opening statement by Ms. Jakobsdótti, Monica Dean, a Senior Associate with the United Nations Foundation who works on Energy, Climate, and the Environment, provided the audience with some preliminary information about the immense scope of the research required to produce the report, describing it as “the most ambitious report cycle the IPCC has ever undertaken its 30-year history.” To draft the report, Ms. Dean said it required 104 authors from 36 countries, who worked for two years and assessed over “6,000 different sources of literature” and reviewed “31,000 government and expert comments.” After completing the report, the authors spent five days with delegates from 195 countries to approve a 42-page summary for policymakers.

The first of the presenters, Dr. Ben Orlove, was one of the lead authors for the report’s section on mountains. He described how mountain glaciers in low- and mid-latitudes of the Earth are shrinking due to warmer air temperatures. Dr. Orlove also detailed how these glaciers and the usual runoff they produce from seasonal thawing contribute to rivers that are then used as a water source for peoples living in high altitudes. Increased runoffs due to warming temperatures, however, can lead to damaging floods and landslides. Should the process of deglaciation progress more rapidly, the results will not only be more flooding and more landslides, but the eventual disappearance of the glaciers. This will devastate communities in proximity to these rivers by severely restricting their water sources. Warming temperatures may also mean less snow in mountain regions, further denuding water sources during the spring thaw and threatening local economies, especially if they are based on agriculture or tourism.

Dr. Orlove added that the disappearance of glaciers has altered the topography of mountainous regions, thereby making some areas impossible to traverse. This can have a cultural—as well as an economic and environmental—impact. Many UNESCO World Heritage Sites and mountains that are sacred to mountain cultures may be damaged or become inaccessible. France’s Mount Blanc, for example, may cease to be white.

The next presenter, Dr. Rob DeConto, was one of the lead authors for the report’s section on polar regions. Dr. DeConto presented a sobering look into how climate change is affecting glaciers in the Earth’s polar regions. He focused most of his attention on a series of graphs included in the report (see page 6 of the summary) that paint a picture of two vastly different scenarios.

In one, we continue on our current trajectory. If we follow this path, changes will become more pronounced in the future as the forces contributing to climate change compound and the effects (temperatures, sea acidification, ocean heat waves, etc.) become exponential in nature. Dr. DeConto, an expert on ice sheet dynamics, also noted that sea level rise could exceed previous projections because of changing dynamics within the Antarctic ice sheet system. Scientists did not fully understand the dynamics of this system until relatively recently. However, Dr. DeConto said the report shows that “Antarctica has the potential to contribute much more to sea level than we were thinking just five years ago.” Particularly after 2100, this could mean several meters in sea level rise. This will have a tremendous impact on existing coastal communities, especially small island nations.

The other path, which is more likely if we comply with the conditions of the Paris Agreement, shows these negative trends slowing or stopping entirely. In attempting to strike an optimistic tone, Dr. DeConto concluded, saying, “Even though there is going to be an ongoing increase in sea levels…you don’t turn the ice sheets around in decades or even centuries, but you can see it’s a much, much rosier picture with perhaps less than a meter of sea level rise even centuries out into the future, and that’s something that I think we can all probably deal with and tolerate.”

Dr. Michael Oppenheimer, the next presenter, was one of the lead authors for the report’s section on sea level rise. Dr. Oppenheimer opened his remarks with a call for hope, but tempered this by admitting that his initial response to the findings was, “There’s a lot for us to do.” This especially pertains to adaptions and emissions reductions that can mitigate the effects and acceleration of sea level rise. Unfortunately, he noted that, “We’ve fallen further and further behind.”

Dr. Oppenheimer focused on a future in which sea levels continue to rise unabated. In this scenario, storm surges “will be riding on top of a higher sea level, so…the storm surge goes further inland.” Consequently, flooding in coastal areas becomes more common and so-called 100-year weather events become relatively common occurrences. By 2050, in many places around the world (including the East Coast of the United States), these storms may become annual events. Without adaptations and attempts to curb emissions, many coastal areas and small island nations will cease to be inhabitable without tremendous amounts of capital to either rebuild structures to accommodate frequent flooding or create barrier systems that keep sea water out.

The final presenter, Dr. Holmes, is a Senior Scientist and Deputy Director at the Woods Hole Research Center. Dr. Holmes spoke about the section of the report that focused on permafrost. “Permafrost is frozen ground,” he said. “It’s technically defined as ground that’s at or below the freezing point of water for two or more years consecutively, but in practice it’s ground that’s been frozen for hundreds or thousands or tens of thousands of years.” Permafrost can be found underneath approximately 25 percent of the land area in the northern hemisphere.

As permafrost thaws, bacteria begin to consume the organic matter that both contains the carbon and has been frozen, thereby releasing both CO2 and methane into the atmosphere. By 2100, Dr. Holmes said the report estimates that, in the best-case scenario, this will translate into “tens of billions of tons of carbon released.” If we do not act, he said, “We’re talking something over one hundred billion tons.”

The subsequent discussion began with a remark by Dr. Francis that seemed to capture the mood of the audience: “Thanks everyone for all that terrible news.” She added that, though the report does paint a ominous picture of the future if we fail to act, “One of the things this report does really well, and one of the reasons it’s so important, is because it’s really highlighting the changes that are going in two really important parts of the climate system: the oceans and the polar regions.”

Dr. Francis then emphasized that there is a vicious cycle in these parts of the climate system, wherein phenomena associated with global warming amplify one another. She used the melting of arctic sea ice as an example: “So far, we’ve seen the artic sea ice disappear by 75 percent in only 40 years.” As temperatures warm, more sea ice melts; as more sea ice melts, less solar energy is reflected back into space and is instead absorbed by the ocean; as the ocean absorbs more of the sun’s energy, temperatures warm; and so on, ad infinitum. According to Dr. Francis, this positive feedback loop “is causing the arctic to warm two to three times faster than just about anywhere else on the planet.” Additionally, this contributes to the thawing of permafrost and the melting of glaciers, particularly in Greenland.

Following the discussion, Mr. Julio Cordano, Chile’s Deputy Lead Negotiator for Climate, provided closing remarks. He noted that, while there needs to be more conversations between nations to address climate change, there is also a narrow window of opportunity. In the near future, he hopes that “we will be able to say we have a very substantial alliance of countries that are willing to increase their ambition and hopefully address the enormous amount of work that we need to do.”
This tone of conditional confidence in humanity’s ability to save itself from its own myopia had resonated among all speakers throughout the night. While the report makes clear that the effects of climate change will be severe if humanity does not work to reduce emissions, each of the scientists emphasized that adhering to the goals of the Paris Agreement will lead to significantly less grim results.

Dr. Oppenheimer described himself as an optimist in his opening remarks, adding: “It doesn’t pay to be paralyzed by gloom and doom.”

“We have the tools at our disposal,” he later added.

Meanwhile, Dr. Orlove claimed: “There’s twice as much glacier loss between now and 2100 with high emissions as there is with low emissions.”

Even Dr. DeConto expressed a hopeful tone while pointing to the two potential trajectories for the Earth’s oceans. Highlighting the projection that does not portend imminent doom, he said, “There’s still a lot of good news in this story.”

A full recording of the event can be found on The Explorers Club’s Facebook page: https://www.facebook.com/TheExplorersClubNYC/videos/541713199912369/