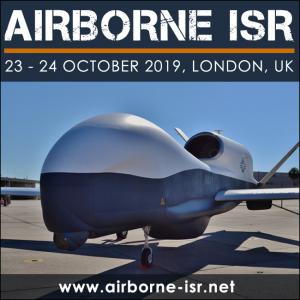 SMi Reports: RAF senior representative confirmed to speak at the Airborne ISR conference, in London in less than 4 weeks’ time

LONDON, UNITED KINGDOM, September 30, 2019 /EINPresswire.com/ — With less than 4 weeks to go for SMi’s 5th Annual Airborne ISR conference, taking place on 23rd-24th October 2019 in London, the event will provide the ideal platform to explore an array of new 5th generation unmanned and manned platforms, well-established NATO programmes, the emergence of cutting-edge technology and the future of airborne ISR.

For those interested in attending the conference, places are filling fast. Register at www.airborne-isr.net/EINpr9
In recent news, the UK MoD have signed a £100m contract to test the RAF's Protector Aircraft.

The UK is replacing the current Reaper aircraft with the 16 Protector RG Mk1, a Remotely Piloted Aircraft System (RPAS). With the £100m contract from the Ministry of Defence, the Protector aircraft will be tested to report back on its performance before its introduction to the frontline. The Protector will be able to fly consistently for up to 40 hours and will be deployed across the full spectrum of operations, including ISTAR, search and rescue, flood prevention or disaster response missions.

With this in mind, the two-day agenda will include a presentation from Wing Commander Mark Jackson, Officer Commanding 13 Squadron, Royal Air Force on ‘Preparing for Protector: Challenges of developing for Ops, whilst simultaneously Delivering on Ops’, covering:

The brochure with the two-day agenda and full speaker line-up is available at www.airborne-isr.net/EINpr9

This year, Leonardo has been announced as a Gold Sponsor and their briefing will be on ‘Advanced ISR sensor capability for tactical platforms’ by Neil ‘Stan’ Hargreaves, Operational Capability Manager.

About SMi Group: Established since 1993, the SMi Group is a global event-production company that specializes in Business-to-Business Conferences, Workshops, Masterclasses and online Communities. We create and deliver events in the Defence, Security, Energy, Utilities, Finance and Pharmaceutical industries. We pride ourselves on having access to the world’s most forward-thinking opinion leaders and visionaries, allowing us to bring our communities together to Learn, Engage, Share and Network. More information can be found at http://www.smi-online.co.uk