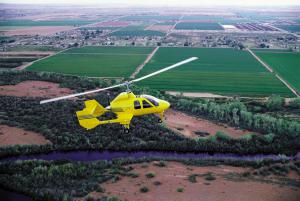 The Hawk 5 combines the safety, reliability and cost effectiveness of fixed wing aircraft with the runway independence of a helicopter. Utilizing an engine driven pre-rotation system while the aircraft is on the ground, the Hawk 5 is capable of jump take-offs, allowing take-off from almost anywhere. With a rotor that is always in autorotation, in the unlikely event of complete engine failure, the Hawk 5’s autorotating rotor continues to rotate, keeping the pilot in complete control to safely land. With no powered rotor in flight and no antitorque equipment, the Hawk 5 also has none of the periodic maintenance or lost business days associated with these systems, leaving the owner with owner with lower costs and higher reliability. Coupled with the flying simplicity of fixed wing aircraft, the Hawk 5 is a workhorse aircraft.

The Hawk 5 will be built at UTVA’s 925,000 sq. ft. facility at Pancevo Center in Serbia, which has a rich tradition of aircraft manufacturing. Offering highly sophisticated production and system capabilities from a trained labor force of qualified aerospace professionals operating within an economically competitive region, UTVA’s 80+ years of demonstrated manufacturing excellence well-positions both companies to capitalize on and meet the demand for safe, low-cost runway independent aircraft. In addition to manufacturing its own aircraft, UTVA has achieved ISO 9001 quality assurance certification and has been certified by Boeing since 1990 as an airframe parts and assemblies manufacturer. As a Boeing certified supplier, the center has produced machined and sheet metal aircraft parts, tools and assemblies, including slats, wing tips and floor supports, for Boeing 737, 747 and 757 aircraft.

Ms. Blagojevic has previously worked for Deloitte, EFG Eurobank and Al Dahra Holding, as well as a number of other companies, including experience working and coordinating projects with government entities. She holds a Bachelor of Economics degree from the University of Belgrade, a Master of International Business Administration from the Escuela de Administration de Empresas EAE Barcelona, Spain, a Manager for SME (small and medium size enterprises) from the UPC Universidad Polytechnica de Catalunya and a Project Cycle Management Certificate from the Singidunum Univeristy.

Skyworks Global is the world leader in gyronautics, the study and design of sustained autorotative flight represented by the company's gyroplane technology. Skyworks has more than 40 patents with several more underway, all obtained in an effort to radically change not only the way gyroplanes are perceived, but also the way they are utilized. From mass personnel transportation, agriculture, and border protection to literally changing the economies of developing nations, Skyworks' goal is to change the paradigm of aerial technology. For more information about the company, its products, and individual members of the Skyworks team, visit www.Skyworks-Global.com