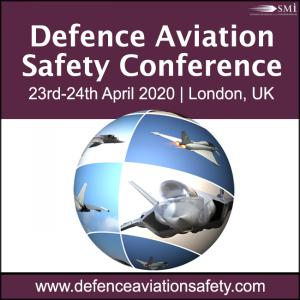 LONDON, LONDON, UNITED KINGDOM, January 6, 2020 /EINPresswire.com/ — Defence Aviation Safety, which will return to London on the 23rd and 24th of April 2020, will bring together defence experts from government and industry, as well as senior military leaders, to discuss critical safety topics within the military aviation domain. As the only event of its kind, Defence Aviation Safety is a must-attend event for all those within the industry.

With this in mind, SMi Group are delighted to announce that Richard Duriez, Airworthiness Manager, Aerospace Capabilities, Defence Investment Division, International Staff, NATO, will be presenting “Implementing the NATO Airworthiness Policy (NAWP),” which will cover:

This will be one of many briefings from experts within the industry; the conference aims to highlight the enhancement of military capability through improved safety standards, certification and data management.

Other key speakers include:

Registration for the event is live on the website and an early bird saving of £200 is available for bookings made before 31st January 2020: http://www.defenceaviationsafety.com/EINpr6

About SMi Group:
Established since 1993, the SMi Group is a global event-production company that specializes in Business-to-Business Conferences, Workshops, Masterclasses and online Communities. We create and deliver events in the Defence, Security, Energy, Utilities, Finance and Pharmaceutical industries. We pride ourselves on having access to the world's most forward-thinking opinion leaders and visionaries, allowing us to bring our communities together to Learn, Engage, Share and Network. More information can be found at http://www.smi-online.co.uk