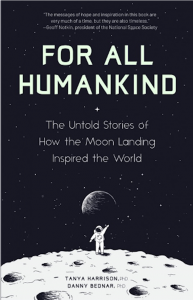 Buzz Aldrin has devoted thousands of hours to the NSS… his unceasing efforts to move humanity beyond Earth orbit and on to Mars have been an inspiration to millions across the globe.”
— Karlton Johnson, Chairman of the NSS Board of Governors

WASHINGTON, D.C., USA, March 17, 2020 /EINPresswire.com/ — A new nonfiction book relives the incredible moment in July, 1969, when humans first set foot on another world. "For All Humankind: The Untold Stories of How the Moon Landing Inspired the World” is being released today and carries the unusual distinction of being associated with three Governors of the nonprofit spaceflight advocacy group, the National Space Society (NSS). Buzz Aldrin, Tanya Harrison, and Geoffrey Notkin were all involved with the new title.

NSS Governor Dr. Tanya Harrison, a planetary scientist, wrote “For All Humankind" with co-author Dr. Danny Bednar. The book examines the worldwide influence of 1969's historic Apollo 11 mission to the Moon from an unusual global perspective, consisting of interviews with people whose lives were deeply and irrevocably changed by the Moon landing from eight countries around the world. It is one of the first popular books to relive this momentous event from a global perspective.

NSS Governor Buzz Aldrin, who along with Neil Armstrong is central to the story, was the Lunar Module pilot of the Apollo 11 mission and has remained an active and authoritative voice for human spaceflight and exploration. His many titles and distinctions include a seat on the NSS Board of Governors.

“Buzz Aldrin has selflessly devoted thousands of hours to the NSS for over thirty years,” said Karlton Johnson, Chairman of the NSS Board of Governors. “His unceasing efforts to move humanity beyond Earth orbit and on to Mars have been an inspiration to millions across the globe.”

Geoffrey Notkin, an award-winning science writer and television host, is the President of the NSS and also sits on the Board of Governors. Notkin provided the cover quote for "For All Humankind." As he says on the book’s cover, "The messages of hope and inspiration in this book are very much of a time, but they are also timeless."

The National Space Society was founded in 1987 via a merger of the National Space Institute, founded by NASA’s Wernher von Braun, and the L5 Society, based on the work of space settlement pioneer Gerard K. O’Neill. It is the world’s largest pro-human-spaceflight organization.

“For All Humankind: The Untold Stories of How the Moon Landing Inspired the World” will be available in hardback from Mango Publishing on March 17, 2020, for a retail price $19.95.

ABOUT THE AUTHORS:
• Dr. Tanya Harrison has worked in mission operations for NASA’s Curiosity and Opportunity rovers and the Mars Reconnaissance Orbiter and has performed research focusing on the planet’s surface geology. She holds a Ph.D. in geology with a specialization in planetary science and exploration from Western University in Canada.
• Dr. Danny Bednar works at the Canadian Space Agency and has a deep interest in using satellites to combat climate change. He holds a Ph.D. in geography with a focus on climate change adaptation from Western University, Canada, where he has also taught courses on space exploration since 2012.
To learn more about the NSS and its mission to establish humanity as a spacefaring species, visit us on the web at space.nss.org.