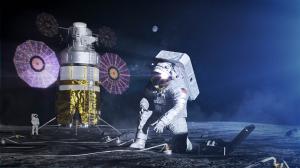 Utilizing the resources found near the lunar poles will be a game-changer…”
— Dale Skran, Chair of the Executive Committee of the National Space Society

WASHINGTON, D.C., USA, May 15, 2020 /EINPresswire.com/ — The National Space Society applauds NASA’s announcement today that calls for robust agreements (the Artemis Accords) with international partners based on a common set of principles governing the exploration and use of outer space, including commercial activities.

“While NASA is leading the Artemis program,” the announcement said, “international partnerships will play a key role in achieving a sustainable and robust presence on the Moon while preparing to conduct a historic human mission to Mars.”

The Artemis Accords constitute a legal framework proposed by the administration to execute international agreements allowing for the mining of valuable resources, such as water and metals, on the lunar surface. Via the Accords process, the U.S. is seeking agreements with like-minded countries based on a common set of principles which include peaceful purposes, transparency, the release of scientific data, the protection of historic sites and artifacts, and the ability to extract and utilize space resources.

“Utilizing the resources found near the lunar poles will be a game-changer,” said Dale Skran, the National Space Society’s Chair of the Executive Committee. “Mining the water ice there will provide rocket fuel, breathable oxygen and drinkable water, all critical to furthering the opening of the solar system for human settlement.”

The U.S. sees the proposed Artemis Accords as consistent with the 1967 Outer Space Treaty, which has been ratified by all major spacefaring powers. NASA states: “the Artemis Accords reinforce that space resource extraction and utilization can and will be conducted under the auspicious of the Outer Space Treaty.” A new international treaty is deemed necessary for the utilization of space resources.

The National Space Society was founded in 1987 via a merger of the National Space Institute, founded by NASA’s Wernher von Braun, and the L5 Society, based on the work of space settlement pioneer Gerard K. O’Neill. It is the world’s largest pro-human-spaceflight organization.

To learn more about the NSS and its mission to establish humanity as a spacefaring species, visit us on the web at space.nss.org.