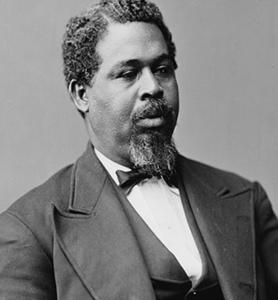 Robert Smalls made a daring sea escape during the Civil War as a slave and went on to serve five terms in Congress as a Representative from South Carolina.

Robert Smalls, (born April 5, 1839, Beaufort, South Carolina, U.S.—died February 23, 1915, Beaufort), African American slave who became a naval hero for the Union in the American Civil War and went on to serve as a congressman from South Carolina during Reconstruction.

His mother was a house slave and his father an unknown white man. Smalls was taken by his master in 1851 to Charleston, South Carolina, where he worked as a hotel waiter, hack driver, and rigger. In 1861, at the outbreak of the war, he was hired to work aboard the steamship Planter, which operated as an armed transport and dispatch vessel, carrying guns and ammunition for the Confederate army. On May 13, 1862, he and the other blacks on board seized control of the ship in Charleston Harbor, succeeded in passing through Confederate checkpoints, and turned the ship, its cargo of weapons, and several important documents over to a Union naval squadron blockading the city. This exploit brought Smalls great fame throughout the North. In 1863, when he was piloting the ironclad Keokuk in the battle for Fort Sumter, the vessel took many hits and was eventually sunk. Smalls’s bravery was rewarded with command of the Planter later that year. He was the first African American captain of a vessel in U.S. service.