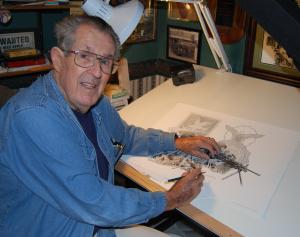 Artist Dick Kramer at the board 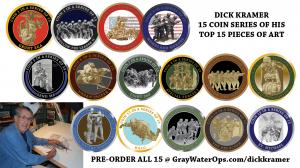 Dick Kramer is an artist known worldwide for his tactical art done in pencil and colored pencil. His art looks like a photograph and is sure to please!

I produced seven vignette drawings for the poster. It was a series of SWAT Officers doing what they do so well.”
— Dick Kramer

HARRISBURG, PA, UNITED STATES, November 5, 2021 /EINPresswire.com/ — About Dick Kramer
Mr. Kramer was born in 1938 in the city of Newark, New Jersey. The early years of his life were spent in the small New Jersey town of Nutley. He was never a good student, he spent too much time drawing. It caused a lot of trouble for him and his family during my school years. He was constantly in trouble for not doing his work. He was too busy drawing.

In his own words:

I left High School on my 17th birthday and joined the Navy. It was one of the best things that ever happened to me. I realized the terrible mistake I had made with my life and finished my education in the Navy.

After four years I was honorably discharged and returned to Nutley where I asked Ginny, the love of my life, to marry me. Thank God, she said yes. We have been married for 52 years and she is still my girlfriend. I am a blessed man.

I began my art education at the Newark School of Fine and Industrial Art in Newark, New Jersey. I transferred to The School of Visual Arts in New York City and finished my art education there. After working for a chain store doing pen and ink illustrations for their advertising publications, I decided to free-lance. We had $78.00 in the bank, four kids and I quit my full time job. Ginny always believed in me even though it was a terrible time as far as money was concerned. She never complained or told me to get a real job; my father-in-law told me that. Ginny has always been behind me, no matter what was happening.

I then spent 8 years as Art Director for ITT Avionics Division, a defense contractor. I found out that I wasn’t meant to be in the “Corporate World” and went back to free-lancing. We moved to Florida, spent 8 years there and that’s where my entire life changed.

I met John Meyer. At that time he was the head of H&K Training Division. He approached me about doing a few drawings for a poster advertising their training facility in Sterling, Virginia. I said yes and produced seven vignette drawings for the poster. It was a series of SWAT Officers doing what they do so well. I didn’t think much of it. The check cleared and I forgot about H&K. When the poster was distributed world wide, the receptionist at H&K threatened to quit. The telephone lines lit up with SWAT Officers from around the world wanting to know who was doing these drawings and how could they get copies. That was the beginning of our fabulous life. We literally started at our kitchen table. I produced four sketches, the first of hundreds and hundreds to come. The rest is history. Ginny and I have been all over the world, from England to Germany to Abudabi and Dubai and all over our wonderful U.S.A. God has blessed us with a wonderful life filled with good friends in the SWAT Community and Corporate World. Half of our business is from our on-line sales of prints and half is from Corporate Commissions.

I never tire of drawing, especially the SWAT/Military world. Ginny and I admire and pray for all of the fabulous people we meet in our business. They are the brightest, bravest and best that our Nation has to offer. Our hearts break when a Police Officer or young Warrior dies in battle. We are all poorer for the loss of such wonderful young men and women. I feel honored to be so close to them and what they do. Every day they place their lives on the line so that we can enjoy the lives and freedoms we have. God bless each and every one of them and their families.

People ask when I will retire or stop drawing. I reply that I want to die at the drawing board. I love what I do and can’t imagine life without my art. I hope God will grant me many more years of drawing the people that Ginny and I love so much.

Mr Kramer has teamed up with veteran owned Gray Water Ops. They're known for their high quality custom minted coins. They are working together to create a series of 15 coins based on Mr. Kramer's most popular pieces of art. Each coin in the series will highlight a different work of art and be individually numbered. You can purchase individual coins or buy the entire series from the Gray Water Ops website. You can also purchase prints or originals directly from Mr. Kramer's website, www.DickKramer.com

Collect one or the lot and and