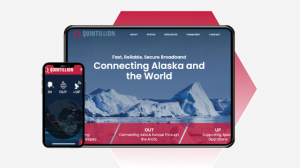 Quintillion designed and launched a new website to capture its mission of connecting the North American Arctic to the rest of the world.

ANCHORAGE, ALASKA, UNITED STATES, November 8, 2021 /EINPresswire.com/ — Quintillion recently launched a new website that highlights its subsea and terrestrial fiber network and captures the company’s vision for the future. The goal of this website was to create an eye-catching, user-friendly site that captures Quintillion’s strategy, mission, and values.

At the center of the new website’s home page is an image of the changing Arctic, which captures a land both of challenges and opportunity. It is in this landscape that Quintillion accomplished the first part of its mission: creating the first and only subsea and terrestrial fiber optic network in the North American Arctic.

The new website captures Quintillion’s “In, Out, and Up” strategy through the home page and web pages highlighting each portion of this mission.

The “In” page highlights Quintillion’s vision of expanding throughout Alaska, which includes Quintillion’s goal to deliver a faster, more reliable internet connection to rural Alaskan communities and other parts of the state. The current fiber optic network is the key part of this mission, which has already connected thousands of Alaskans.

The “Out” page overviews Quintillion’s plan to expand the current fiber optic network from Alaska to other Europe and Asia. It also covers the Arctic as a strategic position for Arctic security, resources, and growth.

The “Up” page reveals Quintillion’s involvement in space telecommunications technology. This includes the HiLDA ground station, which is the highest latitude ground station in the United States.

Additionally, when planning this website revamp, Quintillion knew it wanted to showcase its entire staff. While the old website only showed leadership team members, the new website reveals how much Quintillion values every innovator on their staff, including those who run day-to-day operations and reach out to the Alaskan community.

The resources page offers documents and presentations to provide the community and media with information on the Quintillion project and its impact. It also includes a helpful FAQ page and Quintillion’s up-to-date blog discussing industry news and company updates.