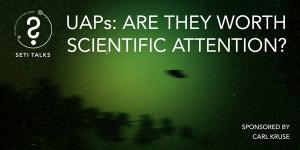 Recent UAP sightings have failed to generate interest among the scientific community. Should scientists care about these events?

MIAMI, FL, USA, November 11, 2021 /EINPresswire.com/ — In June 2021, the U.S. Department of Defense released an unclassified, preliminary report on unidentified aerial phenomena (UAP). UAPs are also commonly called UFOs. The report cataloged and investigated unexplained encounters in the sky by U.S. Navy ships and aircraft. The report’s conclusion was that the vast majority of UAPs do represent physical objects, and their surprising maneuvers are not caused by any U.S. advanced technology programs. Nor are they evidence that those objects came from outer space. So, what are they?

Recent UAP sightings have so far failed to generate interest among the scientific community. Part of the reason could be the apparent taboo around UAP phenomena, often associated with the paranormal or pseudoscientific. Should scientists care about these events?

To address these questions and discuss how we could scientifically study UAPs, The Seti Institute has invited two scientists to discuss their thoughts. Dr. Jacob Haqq Misra, SETI astronomer and senior research investigator at the Blue Marble Space Institute of Science and Dr. Ravi Kopparapu, planetary scientist and an astrophysicist at NASA Goddard Space Flight Center. Both co-wrote two articles, one in Scientific American published in July 2020 and another in the Washington Post in June 2021, advocating for a scientific investigation of UAPs by interdisciplinary teams of scientists. Kopparapu and Haqq-Misra emphasize that discarding the taboo surrounding this phenomenon would generate genuine scientific inquiry in actually finding more about UAPs.

Molly Bentley, host and producer of Big Picture Science, will moderate the conversation. Molly and the two astronomers will discuss the taboo surrounding UAPs and how interdisciplinary teams should conduct a genuine scientific inquiry to understand this phenomena. As Carl Sagan concluded in a 1969 debate, “scientists are particularly bound to have open minds; this is the lifeblood of science.” We do not know what UAPs are, and this is precisely why we as scientists should study them.

SETI Talks are presented to the audience at no cost and are supported by contributions from supporters like you. If you are interested in sponsoring a future SETI Talk, please email The SETI Institute at development@seti.org.

This discussion is scheduled for Wednesday, November 17, 2021 at 7:00PM PST. Carl Kruse and the Carl Kruse Blog are sponsoring the event and encourage all to tune in to what should be a great chat. This SETI Talks will be online only, so please make sure to register for access to this event. It is free and you can do so here: https://www.eventbrite.com/e/uaps-are-they-worth-scientific-attention-tickets-203255872787

As an aside, while Carl Kruse and the Carl Kruse Blog are sponsoring this chat, it is their position that scientists have indeed studied UAPs, and given the evidence, it seems entirely likely that UAPs are probably not of extraterrestrial origin.

About the SETI Institute: The institute is based in Mountain View, California and is the world's preeminent organization focused on the scientific search for extraterrestrial intelligence. Its more than 100 research scientists investigate the nature of the universe and the prevalence of life beyond earth.

Since 2015, the CarlKruse.org blog has highlighted non-profit organizations and people making the world a better place. The blog has previously covered the SETI Institute in articles such as Black Holes are Real – How Do They Shape our Universe? and Can We Define Life? Blog members were involved in the SETI@Home project and closely follow developments in SETI and space exploration.