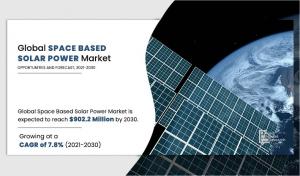 The growth of the global space-based solar power market is propelled by the implementation of strict government regulations concerning environmental pollution.

Depending on the solar satellite type, the laser transmitting solar satellite segment garnered the largest share of about 53.97% in 2020, and is expected to maintain its dominance during the forecast period. This is attributed to increase in demand for space-based solar power systems for providing power for satellites during eclipse, for orbital transfer vehicles, for solar array on the moon, and for electricity generation.

On the basis of application, the electricity generation segment holds the largest share, in terms of revenue, and is expected to continue this trend during the forecast period, owing to rise in energy demand along with cleaner generation of electricity across the globe.

Region wise, the market is analyzed across North America, Europe, Asia-Pacific, and LAMEA. Asia-Pacific was the largest share contributor in 2020, and is anticipated lead during the forecast period, due to increase in investment & R&D toward space-based solar power and presence of large consumer base in the region.

The key players are adopting numerous strategies such as product launch, agreement, and business expansion to stay competitive in the space-based solar power market.

For instance, in May 2021, Northrop Grumman Corporation signed an agreement with Airbus Defense and Space for the design, develop, and produce 24 ship sets of solar arrays to support the OneSat satellite product line. The solar arrays will power the OneSat communication satellites in geosynchronous orbit.

In addition, in January 2021, Boeing signed an agreement with NASA to supply solar arrays for International Space Station (ISS). These new solar arrays will provide power supply to orbiting laboratory. The installation of these solar arrays will begin in 2021.

COVID-19 impact on the market

The outbreak of COVID-19 has negatively impacted various industries and countries across the globe. Owing to the lockdown imposed, globally, decrease has been witnessed in the growth rate of the construction & building, transportation, oil & gas, automotive, and energy sectors. This has further declined the need for electricity, which, in turn, has hampered the growth of the space-based solar power market in 2020. In Europe, the economies such as Germany, France, Spain and, Italy are following stringent measures such as attaining social distance and limiting movements to prevent the spread of coronavirus.

Moreover, R&D activities were on hold due to shutdown of laboratories and incomplete funding. Thus, all these factors collectively are anticipated to result in sluggish growth of the global space-based solar power market in 2020. However, this situation is expected to improve as government has started relaxing norms around the world for resuming business activities.

Get detailed COVID-19 impact analysis on the Market: https://www.alliedmarketresearch.com/request-for-customization/7723?reqfor=covid